Even using public transport is better for your health than travelling by car. Most physical activity studies focus on sport and recreational activity – intense activities often lasting many minutes. We are interested in understanding the impact of everyday activity on health. People lead busy lives. The challenge is to find ways for people to be active and stay active throughout life. For many, everyday activity, like walking or cycling for travel, may be more acceptable, attractive and practical than going to the gym.

For our analysis, we used a large cohort of over 350,000 adults, aged 37 to 73, from the UK Biobank study. At the start of the study people told us about their travel habits, as well as other important health behaviours, such as smoking. We compared people who only used the car for travel with those who undertook some walking, either alone or in combination with the car or public transport. People who cycled were also included in the active group, although few people in our study cycled.

We carried out separate analyses for those who regularly commuted and those who did not. 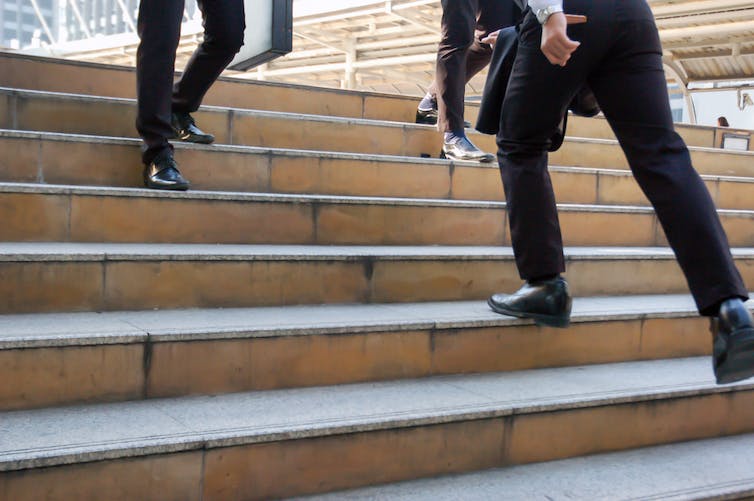 Some people prefer stairs to a Stairmaster. Picture: Shutterstock.com

This was an observational study, so we can’t say definitively that car use causes harm. However, we took many steps to rule out other factors, such as what people eat or underlying illness that might explain the findings. For example, people with poor health might have to use the car because their poor health limits their ability to get around. Their poor health might explain their higher risk of disease. We used statistical methods to adjust for this, and, in some cases, we removed these people from the analysis. While we have tried to eliminate these other factors, we can never be sure we have done this entirely.

Among people who commuted, more active patterns of commuting compared with exclusive car use were associated with an 11% lower relative risk of developing heart disease or stroke and a 30% lower relative risk of death from heart disease or stroke. The association was even stronger when we looked across all forms of travel, both commuting and everyday travel.

Nearly half our sample did not commute. These people were retired, not in employment or they worked from home. Few studies have looked at these people. Among these people, more active patterns of travel compared with exclusive car use were associated with an 8% lower relative risk of death.

Although not all of our findings reached statistical significance, there was an overall pattern. More active patterns of travel, compared with exclusive car use, were associated with reduced risk of heart disease, stroke and death.

It would have been interesting to dig deeper and understand the relative importance of different patterns of travel. How beneficial is public transport compared with car use? Is there an additional benefit of cycling over walking? But, unfortunately, we couldn’t do that with the data we had.

Different data might also have allowed us to better understand why. Other people have suggested that snacking in cars might be a contributory factor, although we think the most likely explanation is differences in physical activity.

Our research builds on what is already widely known about the health benefits of physical activity. Some people may choose to use cars less when they understand the impacts on health. But many people may not have a choice. Others may just do what is convenient, comfortable and normal.

The large differences in travel patterns between cities in developed countries seem most likely to be explained by differences in infrastructure. There have been large increases in public transport use and consequently walking in London, after investment in these travel modes. The Netherlands made a conscious choice to invest in cycling infrastructure in the 1960s and now has high rates of cycling.

While decisions about transport infrastructure may be made for a variety of non-health reasons, our study provides further evidence that health needs to be integrated into decisions that are made about transport.