Why you get muscle cramps and how to stop them

It's not just elite sportspeople who get muscle cramps. If you've ever experienced one, you'll know how painful they are. Many of us know the feeling of a cramp – whether you’ve been struck down on the sports field or woken with a start in excruciating pain in the middle of the night. A cramp is the involuntary contraction of our skeletal muscle, and it hurts.

Some people often experience cramps after vigorous, high-intensity exercise, but there are also many who experience them with no exercise at all – mostly at night. These “nocturnal” cramps occur with increasing frequency as we age, and are common in pregnancy.

Interestingly, these cramps are usually restricted to the lower limb. This is generally the same as athletes experiencing exercise-associated muscle cramps. So, are the causes the same?

Actually, we don’t really know, but there are several theories.

We know cramps are rarely seen at the start of a sporting contest, but regularly seen at the end. So fatigue seems to be the defining factor in exercise. Some researchers have long suggested dehydration and electrolyte imbalance (such as decreased salt content) as a cause.

But recent reviews have downplayed this theory, as the evidence is mostly observational. This means while there may be an association between dehydration, salt depletion and cramps, we can’t prove one caused the other.

And if electrolyte imbalance was implicated, then all the muscles in the body would be affected. But only muscles actively being used tend to cramp, particularly those that cross more than one joint, such as the calf muscle and hamstrings. These may be contracting from a shortened position when the knee is bent.

Muscles have an inbuilt reflex mechanism. When the muscle is tensed, or contracts, a reflexive message is sent to the spinal cord for the muscle to lengthen and relax. This protects the muscle from injury.

The recent reviews suggest what is called the altered neuromuscular control hypothesis to explain cramps. Here, the protective reflex action is disrupted, which usually happens when the muscle is tired. So, in this instance, the muscle contracts, but the usual signal to the spinal cord for it to relax is inhibited. There is now no protective relaxing of the muscle that follows, meaning it contracts for longer than you want it to. 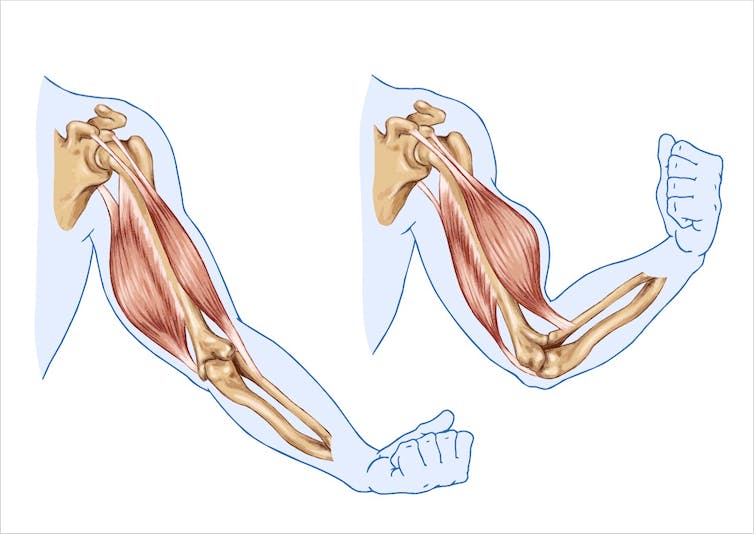 When we tense our muscles a message is sent to the spinal cord for the muscles to relax. Picture: Shutterstock

But the reason for neuromuscular fatigue, and why this inhibits the reflex, is not well understood. Cramps are also more common at the start of a sports season, when muscles are less conditioned. This is most likely due to higher levels of fatigue occurring in less trained muscles.

The altered neuromuscular control could also explain nocturnal cramps, as older muscles of inactive people are generally shorter. Whether this is the case in pregnancy is still debated.

Hot conditions have also been associated with increased cramping, but this likely relates to higher rates of fatigue when it’s hot. Despite what people may think, cold doesn’t increase the incidence of cramps, but may be likely to make the severity of cramps worse as reflexes are stronger in cold, stiff muscles.

Some people seem to experience cramps more often than others, which may be related to the sensitivity of their muscle reflexes.

Cramps are more prevalent in males, which may be because males have more fast fibres, or because females demonstrate less fatigue when exercising at similar relative intensities. 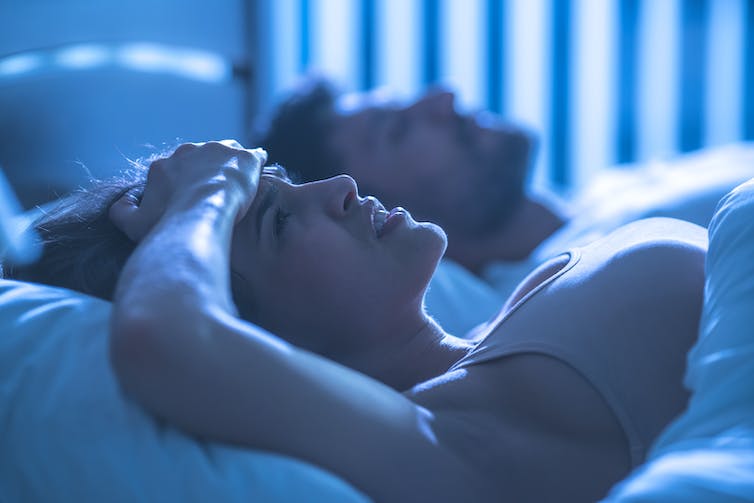 Cramps may occur during the night, including commonly in pregnant women. Picture: Shutterstock

Nocturnal cramps are more commonly reported in older age. There is also a particularly high prevalence of cramps in pregnancy, generally beginning in the second trimester and often worsening in the third.

No one really knows exactly why this occurs. It may be due to increased fatigue from carrying the extra body weight, or increased pressure on the leg muscles due to slowed return of blood to the heart.

Hormones could play a role too, and there have been suggestions that women taking the contraceptive pill could be more prone to cramping. Connective tissue stiffness is altered by sex hormones.

But, while reflex sensitivity does change with the phases of the menstrual cycle, the muscle stretch reflex is actually lowest at ovulation, and there is limited evidence that the pill affects this.

How do we treat cramps?

Salt tablets and magnesium have been commonly used for cramps, but because electrolyte imbalance and dehydration don’t appear to be the cause, their usefulness is debatable. 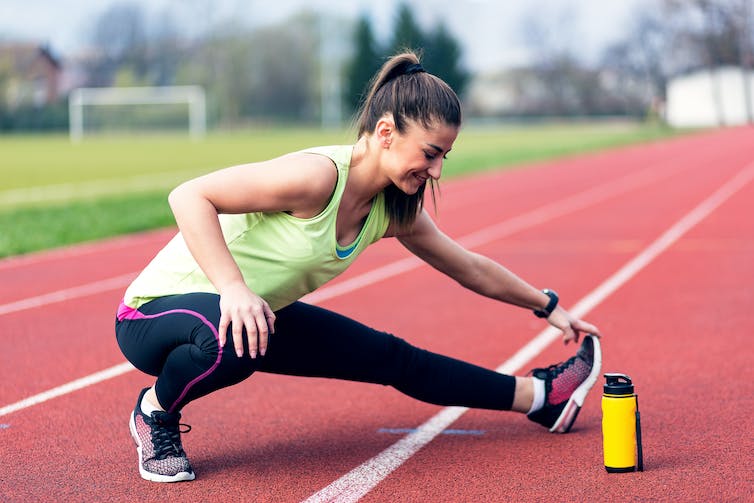 Stretching is generally the best way to get rid of a cramp. Picture: Shutterstock.com

The best way to get rid of a cramp is by stretching the muscle, since the reflex to do this is likely being inhibited. However, stretching a severely cramping muscle might cause a degree of damage to the muscle.

Given the overall lack of understanding of exactly how cramps occur, evidence-based prevention strategies are few and far between. If fatigue is one of the main causes of increased susceptibility to cramps, then methods to delay fatigue – such as fluid intake and salt replacement during exercise – may help prevent them. This can also aid performance.

Massage (due to reduced nerve sensitivity) and stretching may also help decrease the incidence of cramps in older people and during pregnancy.