Research is increasingly finding an association between alcohol consumption and sperm health. Abstaining from alcohol during preconception and pregnancy is usually considered to be the woman’s responsibility. The main concern surrounding alcohol exposure during pregnancy often relates to well-established evidence of newborns developing a range of behavioural, physical and cognitive disabilities later in life.

But recent research is also pointing to a link between alcohol and poor sperm development, meaning the onus is on expectant fathers too. A myriad of studies are showing biological fathers who drink alcohol may have a significant role in causing health problems in their children.

Studies are showing paternal alcohol consumption has negative effects at all levels of the male reproductive system. This is as well as altered neurological, behavioural and biochemical outcomes in subsequent generations.

In Australia, men consume alcohol at high or risky levels on a regular basis. National health guidelines recommend no more than two standard drinks on any day.

According to the National Alcohol and Drug Knowledgebase, Australian men usually drink more alcohol than women.

Data has shown males are twice more likely than females to consume more than two standard drinks per day on average over a 12-month period (24% compared with 9.8%). And about a third of males said they exceeded the guideline not to drink more than five standard drinks on a single occasion on a monthly basis.

These figures are alarming given the compelling evidence about the impact of excessive, chronic or binge alcohol consumption on sperm, semen quality, fertility and child health.

Animal studies have shown a single dose of ethanol into the stomach lining (equivalent to a human binge drinking) induces damage to the testis, damaging the cells essential for sperm formation.

In another experimental study, sperm health and fertility was assessed in male rats after administration of alcohol into the stomach for ten weeks. The results confirmed alcohol significantly reduced sperm concentration and the ability of the sperm to move properly. And none of the rats exposed to alcohol fertilised the females, despite confirmation of successful mating.

A myriad of other non-human studies have also shown similar results, suggesting ethanol has the ability to damage sperm and fertility.

Studies in humans have also supported these findings. A recent study of 1,221 young Danish men (18-28 years of age) tracked alcohol consumption in the week preceding the study to determine its effects on semen quality (volume, concentration, total count, and shape).

The results showed sperm concentration, total sperm count and percentage of sperm with normal shape got worse the more the men drank. This association was observed in men reporting at least five units of alcohol in a typical week, but was most pronounced for men with a typical intake of more than 25 units a week. This suggests even modest habitual alcohol consumption of more than five units a week can negatively affect semen quality.

A recent review of studies and meta-analysis of population data replicated many of these findings. The main results showed daily alcohol intake at moderate to high levels had a detrimental effect on semen volume and normal shape.

The effects on children 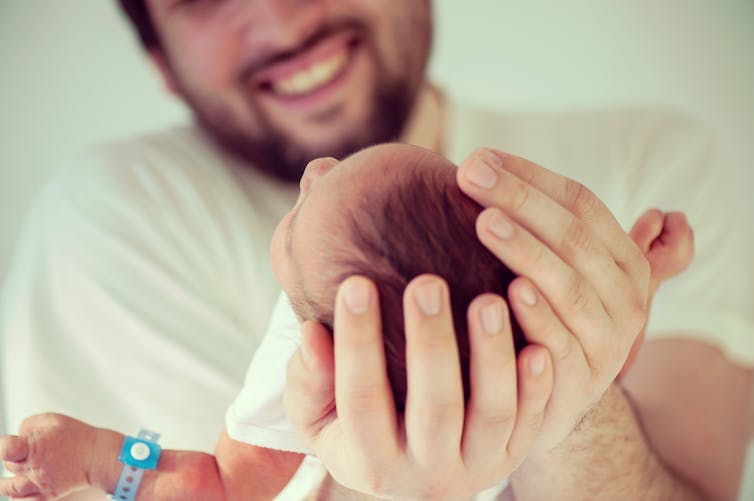 Studies suggest alcohol use in the preconception period can be detrimental to the health of your baby. Picture: Shutterstock

Limited studies have tracked the drinking patterns of fathers around the time of conception and subsequent health outcomes of the child. But rodent models have shown changes in offspring weight and development, learning and activity, anxiety related behaviours and molecular and physiological effects.

A study also reported the women whose partners consumed ten or more drinks per week prior to conception had two to five times increased risk of miscarriage compared to those whose partners did not drink during preconception.

Other studies provide some preliminary evidence that paternal preconception alcohol use is associated with acute leukemia at high-level use, heart malformation with daily use, microcephaly with low to moderate use, and effects in relation to fetal growth and mild cognitive impairments.

How can alcohol affect kids before they’re born?

The exact mechanism of how alcohol alters developing sperm and the later health outcomes of the foetus is still not yet fully understood. It’s been suggested alcohol can change the micro-environment within the testes, altering the development and maturation of the sperm.

It’s also been suggested alcohol can influence sperm by creating genetic alterations and epigenetic marks. This means changes to gene expression occur without changes to the underlying DNA sequence. These epigenetic marks can be transferred at the time of fertilisation. This can subsequently alter the molecular makeup of the early embryo, leading to alterations in foetal development and the potential to impair offspring health.

The biggest hurdle for researchers now is continuing to translate findings from the basic sciences to more sophisticated research in humans. The next stage is to identify patterns of alcohol use by men during the preconception period on foetal and childhood outcomes in the Australian context.

But most importantly we need to realise decisions about alcohol use during the preconception period are not the sole responsibility of women. We need to be talking to men about these issues to ensure healthy outcomes for the baby. Yes, men can experience pregnancy symptoms- here's how
6 days ago
6 days ago No, there's no such thing as hugging your child too much
4 weeks ago
4 weeks ago

Yes, men can experience pregnancy symptoms- here's how
6 days ago
6 days ago

No, there's no such thing as hugging your child too much
4 weeks ago
4 weeks ago