Many major roads in the city’s metro have been flooded after heavy rainfall.

The Mangaung Metro Municipality has issued a statement stating that a Joint Operation Committee was immediately activated to deal with issues related to the recent floods experienced in the metro, Bloemfontein Courant reports.

In the past two days, the city has been hit by heavy rains with localised flooding and this resulted in most of our areas (regions) being affected. These rains have put a strain on our drainage system because of the high volumes of water.

A Joint Operation Committee was immediately activated and have been able to make some breakthrough in other areas related to the floods. Among others, the priority is making sure affected families have access to the municipality halls.

The following roads are deeply affected:

Both motorists and pedestrians are urged to avoid these roads and use alternative routes.

The metro has added more traffic officers to regulate traffic, and different stakeholders have been involved such as Red Cross, EMS, and Sassa.

Ward councillors are all alert and will be assisting households that are affected with the municipal facilities that are closer to affected areas. Households are urged to open/make pathways out of their yards to allow for free flow of water to avoid flooding.

Heavy plastic covers for leaking roofs are available and so are inflatable canoes where there’s a need for rescue services.

It was also reported in a separate Bloemfontein Courant article that residents in the city banded together to retrieve two vehicles stuck in the dense mud in Langenhovenpark this morning. Bloemfontein Courant discovered a group of students and other residents attempting to remove a Toyota Hilux and another bakkie out of mud. 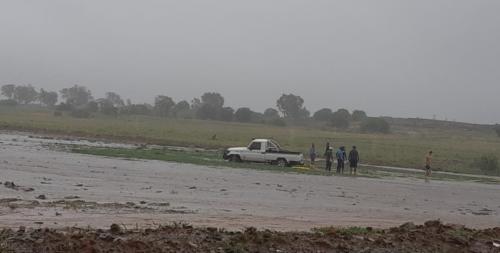 Bloemfontein has been experiencing heavy rains for the past few days resulting in floods across the city. This is when residents turned a troubling situation into an opportunity to lend a helping hand. 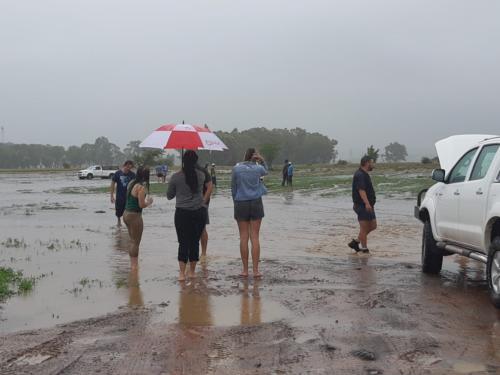 According to a student, they were playing in the rain at Stuck in the Mud, an offroad motorbiking area in Langenhovenpark when one of the cars got stuck. They tried to pull it out when the second vehicle also became fixed in the dirt. 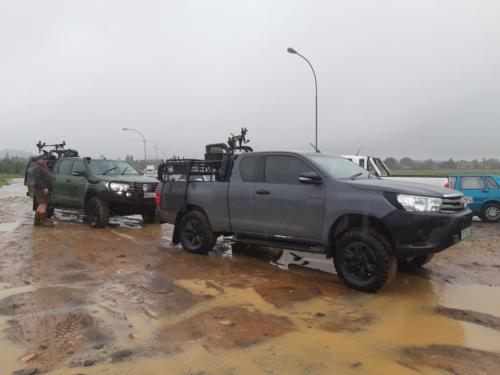 Residents are warned to take precaution while driving in the heavy rain as accidents are more likely to occur.

As a result of the heavy rain, road users have experienced more traffic congestion than usual. According to Hillary Mopethe – the spokesperson of the department of police, roads, and transport – drivers should be patient and exercise caution while travelling around the city and surrounding areas.

“We appeal to them to have patience and vigilance as well as respect the rules of the road. You cannot just try to overtake other vehicles or drive over a solid line under these conditions,” said Mopethe.

“Some of the roads are flooded here and there. They should also be careful because when it rains like this we tend to get potholes on the road,” she added.

Mopethe stated that no fatalities had been reported during this time.

“We would like to maintain this until the weather clears so please be patient with one another on the road,” she explained.

Bloemfontein Courant took to the streets today and reported that accidents took place in Nelson Mandela Drive, Fort Street Subway, and Markgraff Street among others. 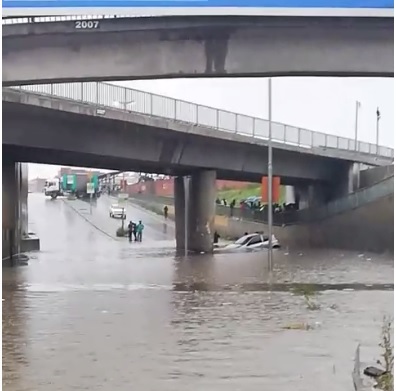 Two unidentified men came to the rescue after a woman was trapped inside her car under the bridge on Fort Street in Bloemfontein. According to a municipality worker who was on the scene, they tried to warn the woman, from the side of the bridge, not to drive through the water because it was dangerous.

“We were busy fixing the drain for water to flow better so that the bridge would not be flooded when we saw the car coming towards the flooded bridge. We then tried signalling the driver to try and warn them that it was unsafe to cross,” the metro municipality worker told Bloemfontein Courant.