The tribute film is set to feature rare footage, peak performances and dozens of new interviews.

South Africans can look forward to experiencing the true splendour of Pavarotti’s career in cinemas nationwide from Friday next week.

“I want to reach as many people as possible with the message of music, of wonderful opera,” said Luciano Pavarotti.

His career stretched over 40 years, with more than a 100 million albums sold.

Discogs reports that Pavarotti released 296 albums, 46 singles and extended-play records, and featured on 362 compilation albums. They, along with a look at the life, career and legacy of the musical icon dubbed “The People’s Tenor” are all appreciated in this documentary.

“For me, music making is the most joyful activity possible, the most perfect expression of any emotion,” said Pavarotti, years after he abandoned his own childhood dreams of being a football goalkeeper.

Growing up in a family of little means, his father’s fine tenor voice recordings were his first and earliest musical influences.

Born in 1935 near Modena, Northern Italy, Pavarotti embarked on music studies in 1954, at the age of 19. The year after, his success story started to take shape, when, alongside his father, he joined the male choir, Corale Rossini, which won at that year’s International Eisteddfod in Llangollen, Wales.

Pavarotti started building a world-acclaimed resume with his debut operatic role as Rodolfo in the Teatro Reggio Emilia’s production of La Boheme in 1961, followed by his American debut in the Miami production of Lucia di Lammermoor in 1965.

That year he formed one of his shaping partnerships, with Joan Sutherland – an Australian soprano.

It was, however, only in 1972 during a production of La Fille du Regiment at the Metropolitan Opera in New York, that his major breakthrough came, with the delivery of nine effortless high Cs in the famous aria, leading up to a record 17 curtain calls, and the title of the “King of the High Cs”.

Even Pavarotti admitted: “Am I afraid of high notes? Of course I am afraid. What sane man is not?”

In 1980, Pavarotti appeared in Rigoletto, singing the role of the duke to more than 200 000 people in Central Park. That year, he won the Grammy Award for his album, O Sole Mio. 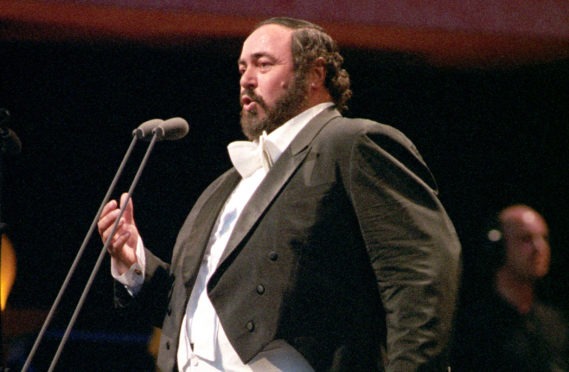 In 1990, during the Fifa World Cup in Italy, he performed Puccini’s Nessun Dorma – the BBC’s anthem for the tournament. This aria achieved pop status and, along with that year’s World Cup soundtrack, remained his trademark song.

More defining milestones were crafted when the album, The Essential Pavarotti, became the first classical album to reach number one on the UK Top Charts for five consecutive periods.

Pavarotti’s career entered a new era, which focused less on opera and more on collaborations with commercial artists and live performances.

Between 1992 and 2003 his humanitarian side became just as influential a part of his story, as his music. As a member of the Red Cross, he worked for the improved circumstances of refugees and served at various other philanthropic organisations, where he continued to build the famous, 10-series annual charity concerts, Pavarotti and Friends, raising millions of dollars for charity.

One tremendous achievement was the benefit concert he organized in 1995 for the children of Bosnia, which included collaborations with Michael Bolton and U2’s Bono.

Besides these classical-meets-pop numbers, he stayed true to his art, with the inclusion of classical duets, with the likes of soprano Nancy Gustafson, tenor Andrea Bocelli, as well as new-age artist Andreas Vollenwieder.

In 1995 after the release of his biography, Michael Walsh wrote in a New York Post article: “With stadium concerts, TV specials, and a chatty new autobiography, Pavarotti is bigger – way bigger – than opera itself.”

Pavarotti’s final appearance was during the 2006 Winter Olympics opening ceremony in Turin, Italy, where he once again performed his trademark aria, Nessun Dorma, which recorded the longest and loudest ovation from an international crowd.

At the time of his death, Pavarotti was the best-selling classical artist in history and the Guinness world record-holder for receiving the most curtain calls – 165.

Pavarotti will open in South African cinemas on September 27.