Jamie Bell in Skin. Picture: A24

Long after the images dim from the screen, the film will remain in the mind because racism is still a worldwide problem.

Skin is a deep, dark biographical drama which follows the life of former white supremacist, the skinhead Bryon “Pitbull” Widner, and his attempts to break free from the shackles that encased him as a young boy.

It’s a true story with Jamie Bell giving a riveting performance as Pitbull, a zealous right-wing neo-Nazi and white supremacist.

This tattooed monster led a group of degenerate society outcasts in Ohio who fervently believed in protecting their white heritage. They hated with a vengeance African-Americans, Muslims, Jews and gay people and caused trouble wherever they went, fighting, maiming and killing. 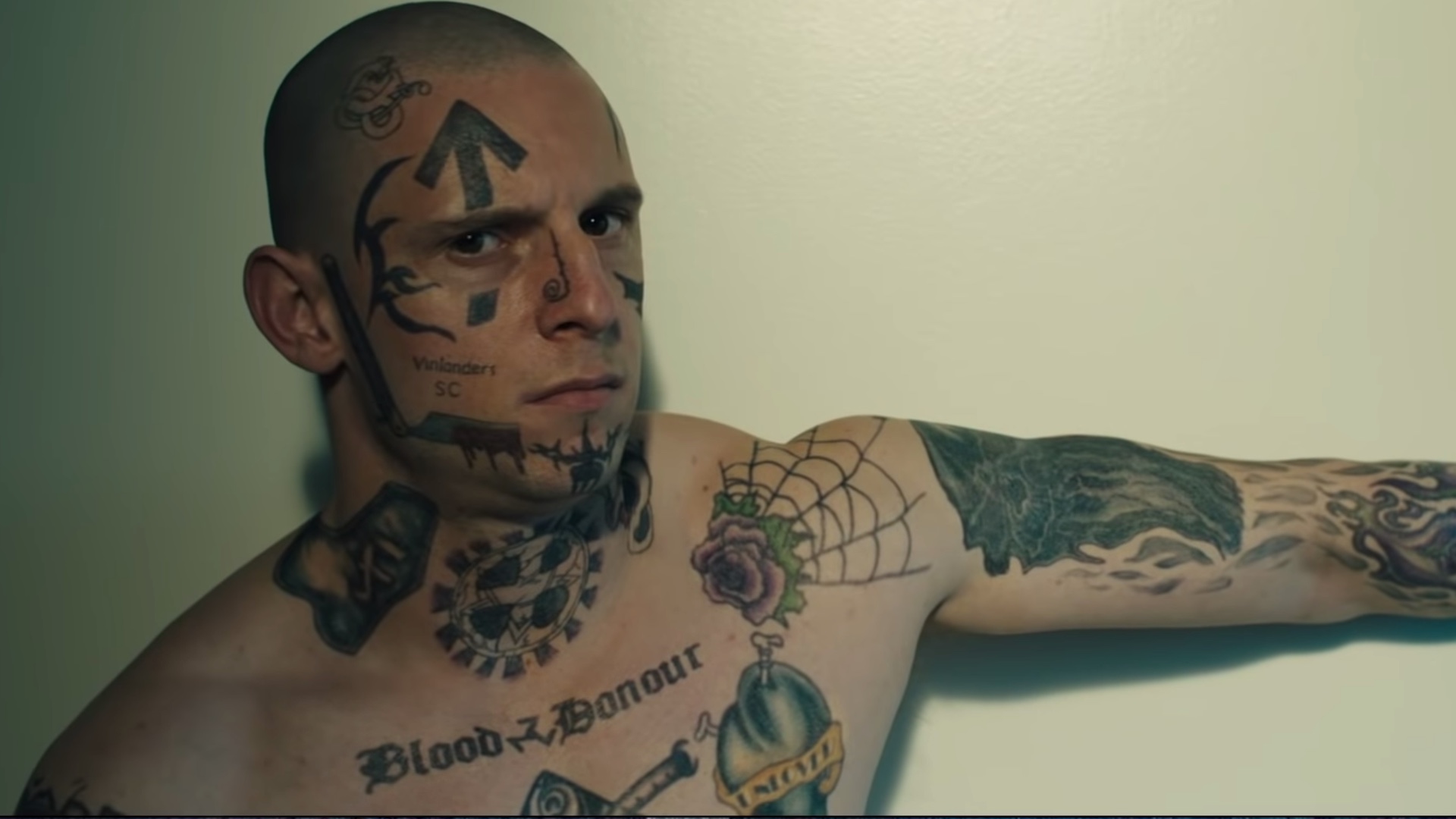 Jamie Bell in Skin. Picture: A24

We meet Pitbull as a young boy from a dysfunctional home who is befriended by a family, Fred “Hammer” Krager and his alcoholic wife Ma (Vera Farmiga). He becomes an integral part of their family, growing up in an environment of hate.

Harrowing scenes follow as we witness Widner and his gang on the rampage. When they are not hurling abuse at people, wrecking property or torturing some unfortunate individual for the sheer fun of it, they are drinking and hanging out on Hammer’s farm.

The bearded, no-nonsense Hammer is played by Bill Camp and he is a figure whom you instantly dislike. He orchestrates the death and destruction that the gang carries out, and in one frightening scene they set alight a mosque harbouring Muslim fugitives.

Widner meets the overweight Julie Price (Danielle Macdonald) and her family of three girls. Abandoned by her partner and left to fend for herself, Julie meets Pitbull and a tentative relationship begins, one that eventually changes both their lives.

Danielle Macdonald and Jamie Bell in Skin. Picture: A24

Tension erupts when Pitbull and Julie escape the family and are being hunted down. They need to find a place of refuge. He is slowly changing his ways as Julie’s influence begins to tell on his psyche.

He is also deeply influenced at this stage in his life by a bold, black activist (Mike Colter) who helps show him the error of his ways.

Director Guy Nattiv, who also wrote the screenplay, keeps his film charged with apprehension and darkness as Pitbull and Julie, together with the girls, attempt to stay ahead of the pursuers.

The production, with its frightening undercurrent, has the power to play with the mind because it is all so real: the unprovoked violence, the indoctrination of the young and the racial hatred that is spawned.

Mike Colter and Jamie Bell in Skin. Picture: A24

The film’s crowning glory is the performance of Jamie Bell who brings home the inner turmoil of this conflicted white supremacist seeking redemption. Also rendering powerful interpretations are Danielle Macdonald – last seen on screen in Dumplin opposite Jennifer Aniston – and Vera Farmiga as Ma.

Long after these images dim from the screen, Skin will remain in the mind because this scourge is still a rampant, worldwide problem that, at times, seems to be growing in strength.