It is believed that the artist will be remembered as one of the pioneers of modernist painting in South Africa.

To end 2019, Kagiso Patrick Mautloa won the Helgaard Steyn Award for his work Urban Vibes (City Buzz). With it also comes R625,000 – but really it honours his impressive impact on South African art.

“On behalf of the Bag Factory board, artists and staff, we are all incredibly proud of Bra Pat for this momentous and long overdue recognition of his work,” says Candice Allison, director of Bag Factory.

“Pat was part of the early community of artists that supported the late David Koloane and John Loder when the Bag Factory was founded in 1991. And, more than 27 years later, he still works from his studio at the Bag Factory, where he takes inspiration from the surrounding fabric of the city and a lifelong love of jazz, shared with the early community of studio artists.”

The winning work represents the urban landscape and the manner in which lives in the city are constantly in motion and transit. There is also a strong interplay between the figurative and the abstract, that echoes the detritus that builds up in the Johannesburg’s streets.

As a mixed media element, the tricolour plastic-weave bags synonymous with immigrants are interspersed throughout the work to remind us of the city’s migrant history – and Mautloa’s beginning working with these kind of textiles.

“Community is a word that the Bag Factory embraced as a daily ethos to live and work by, espoused by a generation of artists who selflessly put their own careers aside to focus instead on the development and mentorship of hundreds of young artists who have participated in our studio and creative programmes,” says Allison.

The cause and effect of the work also captures his daily life. 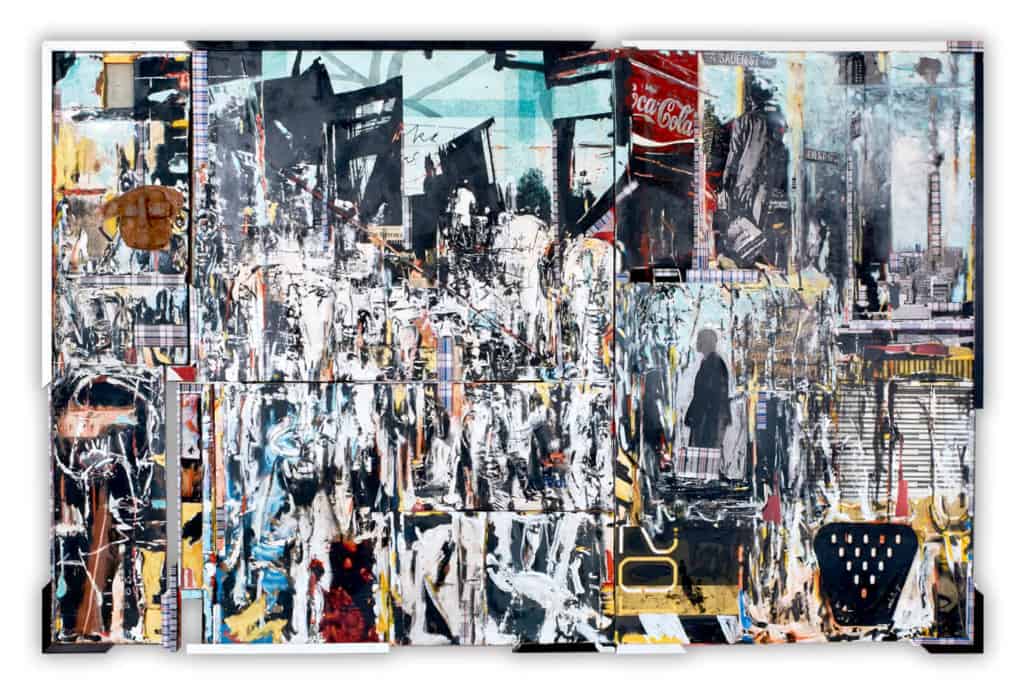 “During his strolls, he engages with the city on street level, collecting urban detritus and debris that find their way into his work, either as reference or as physical objects.

“His art is interwoven with the fabric of his surroundings – each work becoming a document of this place and our collective sociopolitical condition.

“Urban Vibes (City Buzz) is a prime example of his artistic process and practice and visual evocation of place.”

Strydom believes that although the grant is awarded to a particular artwork, an important part of the criteria also demands that the artist’s stature and contribution to the South African arts and culture landscape, and in the particular discipline, be taken into account.

“Apart from his own contribution to the development of a uniquely South African painting practice, Mautloa has inspired and mentored a generation of black artists who were held back by the strictures of apartheid.

“His continued involvement in the Bag Factory, which also annually hosts artists from all over the world, means that Pat’s contribution and legacy stretches far beyond South Africa,” he says.

This sentiment is already far-reaching.

“Pat will be remembered as one of the pioneers of modernist painting in South Africa; as an artist who was brave and bold enough to throw himself into experimenting with abstraction and harnessing this aesthetic to develop his own unique style; and for his use of materiality to create paintings that vibrate with the life of his subjects,” says Allison.