The financial thriller drama is available to watch on Showmax.

Devils, a new 10-part series inspired by the best-selling novel by Italian trader Guido Maria Brera, has become an overnight success with an astounding 7.1 out of 10 IMDb rating since its release in April.

But what is it about this show that makes it so utterly engrossing?

For one, this fast-paced, ruthless series anchors itself in real-life headline stories that touch on the Argentine crisis and the recessions in Ireland and Greece, as well as the Strauss-Kahn scandal.

While not everyone is interested in stock markets and financial storylines, Devils masterfully swishes from drama to thriller as it paints an ominously topical picture of the power wielded by the world’s top financiers.

Second, its release, which coincided with our biggest health crisis to date and its knock-down effect on global stock markets, gives the series extra resonance.

But the brilliant scripting, production and timing of Devils should not take away from the perfectly cast actors: Grey’s Anatomy’s Patrick Dempsey (as bank CEO Dominic Morgan) and Suburra’s Alessandro Borghi (as ruthless head of trading Massimo Ruggero).

In an interview with WorldScreen, Dempsey alluded to previous financial crises and the relevance of the series in our current times by saying: “We’re still paying the price of [those] financial crises, and we’re going into another one right now.

“Democracies are really fragile, and the unsustainable nature of capitalism, I mean, that type of growth … we have to pull back. We really do have to look at how we’re living in the world.” 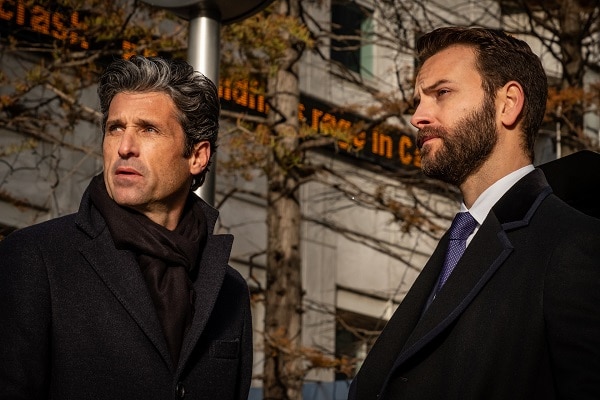 Speaking to Mipcom News, director Nick Hurran said that after spending huge amounts of time on science fiction projects he’d been yearning to do something that had a human story.

“I read Guido’s novel and it made me angry. But then it inspired me to tell the story of how people are affected by a global financial system that is broken and still impacting on lives around the world.”

And if you loved The Wolf of Wall Street (Leonardo DiCaprio) and you’re hooked on Billions (Damian Lewis and Paul Giamatti) then this stylish, sophisticated international thriller is set to be your next binge addiction. But don’t take our word for it. Here is what some Google Viewers are saying about the series:

“What I like about this is the storytelling technique of this show. The casting is amazing and Patrick Dempsey is amazing as the literal devil.” – Nilanjan Chakraborty

“The acting and scripting is just on-point, you simply cannot tell who is good or bad or even in the game, even when they are partially revealed. That is among its many strengths to keep you engaged.” – Storm Ace

Still not convinced? Why not sample the series for yourself on Showmax to see how hard it is to pull yourself away from your screen.