New signs were installed in the area Thursday, warning passersby not to take photos or videos in the 'dangerous area'. Selfie-snapping tourists railed against the closure of Hanoi’s ‘train street’ on Thursday after police blocked off the Instragram-famous tracks for safety reasons.

The narrow railway corridor in central Hanoi has become a hotspot among visitors seeking the perfect holiday snap on the tracks — often dodging trains that rumble through daily.

But Hanoi authorities said this week they would block people from the tracks to avoid accidents, and police on Thursday erected barricades to keep out disappointed visitors.

Dozens of other tourists were turned away, though some managed to get onto still-open sections of the railway, moving out of the way as an afternoon train chugged past.

Built by former colonial rulers, the railway once shipped goods and people across France’s former Indochina colony and remains in use today by communist Vietnam’s state-run railway company.

The stretch of the tracks was once known as a rough part of town, occupied by drug users and squatters until their recent discovery by camera-wielding holidaymakers who have splashed images of the area across social media.

Cafe owners complained that business would be hurt thanks to the new regulations, and that tourists always moved out of the way for oncoming trains.

“There has never been any regretful accidents here,” said Le Tuan Anh, who runs a cafe from his home along the tracks. 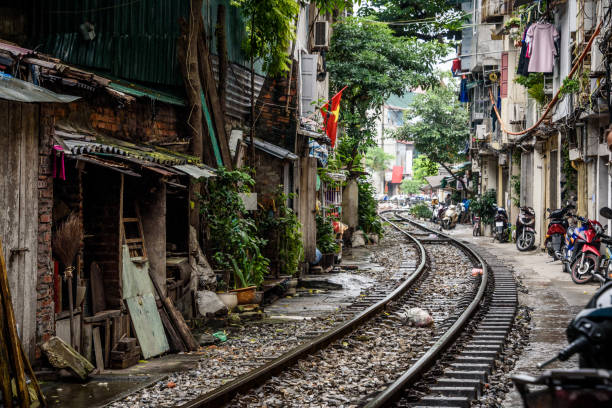 “Compared to traffic density elsewhere in the city, this is much safer,” he said, referring to Hanoi’s chaotic, motorbike-clogged streets.

New signs were installed in the area Thursday, warning passersby not to take photos or videos in the “dangerous area”, much to the chagrin of British tourist Harriet Hayes.

“People come from all over the world to Hanoi just to see the train go past,” she said.

“It’s such a shame that we come and have been told that we have to leave.”