How data collection and analysis tools are transforming sports

Collecting and analysing data is entering a new era as it transforms sports ranging from rugby to Formula 1. Coaches and managers have always been among the stars of any sports. They become household names as much as the sports heroes who populate their teams.

Now, thanks to the power of data collection and analysis, they are about to raise their game to unprecedented levels.

The evolution of data for fine-tuning sports performance has already been experienced in Formula 1 racing, baseball and American football. All are known for the massive amount of statistics they produce. Typically, however, these were jealously guarded by coaches trying to get an edge over their rivals.

Thanks to the science of “big data”, that has changed dramatically.

“American baseball has the most sophisticated data science analytics of any sports in the world because baseball has this long history of stats,” said Ariel Kelman, vice-president of worldwide marketing at Amazon Web Services (AWS), the cloud computing giant that is working closely with sports teams and leagues around the world.

“It’s an incredibly opaque world. I’ve tried for many years to try and get the teams to talk about it, but it’s their secret sauce and some of these teams have eight, nine or 10 data scientists.”

In an interview during the AWS Re:Invent conference in Las Vegas last week, Kelman said that this statistical advantage was not lost on other sports, where forward-thinking coaches fully understood the benefits. 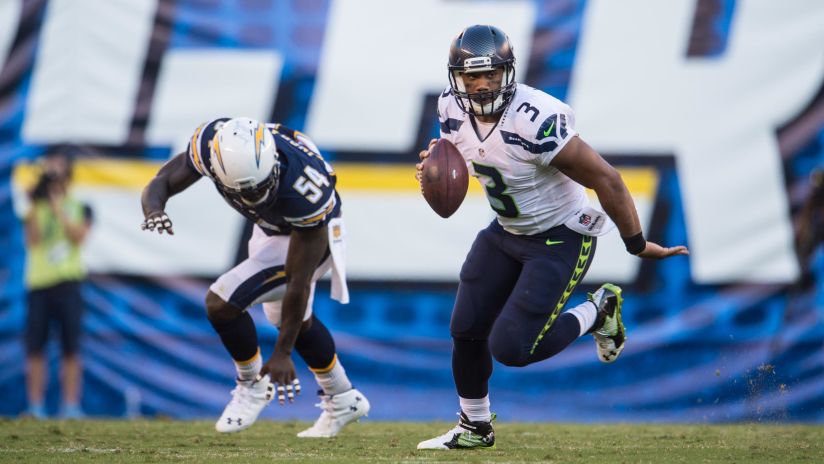 Seattle Seahawks in action against the San Diego Chargers in the NFL. Picture: Seahawks Twitter

In particular, American football, through the National Football League there, was coming on board in a big way.

“We did an announcement with the Seattle Seahawks earlier this week; they chose us as their machine learning, data science and cloud provider to do this kind of analysis, to help figure out their game strategy.

“They are building models predicting the other teams and looking at players and also evaluating all their practices. They are setting up computer vision systems so that they can track the performance of the players during their practices and have that inform some game strategies.

“The teams then even talk about using it for player evaluation, for example trying to figure out how much should we pay this player.”

Healey, in particular, represents the extent to which data analysis has crossed sporting codes. He has spent four years with All Blacks, after 10 years with the New Zealand Olympic Committee, helping athletes prepare for the Olympic Games. Rugby Championship match between the New Zealand All Blacks and the South Africa Springboks at Westpac Stadium on September 15, 2018 in Wellington, New Zealand. (Photo by Anthony Au-Yeung/Getty Images)

“The game of rugby is chaos,” he told the audience. “There’s a lot of a lot of things going on. There’s a lot of trauma and violence and it can be difficult to work out the load management of each player. So, data collection is a big piece of the technical understanding of the game.

“A problem for us in rugby is the ability to recall what happened. We have to identify what’s situational and what’s systemic. “

The situational thing that happens, which is very unlikely to be replicated, gets a lot of attention in rugby. That’s the sensational big moment in the game that gets talked about.

“But it’s the systemic plays and the systemic actions of players that lies underneath the performance. That’s where the big data starts to really provide some powerful answers. Coaches have to move away from those sensational and situational moments.

“We’re trying to get them to learn what is happening at that systemic level, what is actually happening in the game. How do we adjust? How do we make our decisions? What technical and defensive strategies need to change, according to the data?”

Healey said AWS was providing platforms for tracking players and analysing patterns, but the challenge was to bring people on this technology journey.

“We’re asking our coaching staff to change the way they have traditionally worked, by realising that this data does give insights into how they make their decisions.” Kelman agreed this was an obstacle, not just in sport, but in all sectors.

“Across all of our customers, in all industries, one of the things that’s often underestimated the most is that getting the technology working is only the first step. “You have to figure out how to integrate it with the processes that us humans, who dislike change, work with.

“The vast majority of it is about building knowledge. There’s ways to transfer that learning to performance.”

Of course, data analytics does not assure any side of victory, as the All Blacks discovered during the recent Rugby World Cup, when they were knocked out in the semifinals and South Africa went on to win.

Healey was asked how the data-poor South Africans succeeded where the data-rich All Blacks couldn’t.

“You have to look at how analytics and insights and all these technologies are available to all the coaches these days,” he said.

“The piece that often gets missed is the people piece. It’s the transformation of learning that goes into the player’s actual performance on the field. “We’re providing them with a platform and the information, but the players have to make the decisions. We can’t say that this particular piece of technology played a role in winning or losing. It’s simply just a tool.”

The same challenge faces motor racing, which generates massive amounts of data through numerous sensors and cameras mounted in vehicles.

Smedley, who spent 25 years working in engineering roles for Formula 1 teams, quipped that his sport had a “big data” problem before the phrase was invented.

“We’ve always been very obsessive about data,” he said. “Take car telemetry, where we’ve got something like 200 to 300 sensors on the car itself. And that goes into something like two to three thousand data channels.

“So, we’re taking about around 600 gigabytes of data generated every single lap, per car. On top of that, where we’ve also got all the time data and GPS data.

“The teams are using it for performance advantage. We’re into such marginal gains now because there are no bad teams in Formula 1 anymore. Data analytics provide those marginal gains.”