The scene is Duggal Greenhouse in Brooklyn in the US, overlooking New York’s East River. The occasion is the annual Next@Acer press conference, where the computer brands unveil latest cutting-edge gaming machines.

For some attendees, it is business as usual – yet another launch of yet another range of computers and laptops. For Acer, it is the beginning of a new chapter. It is unveiling its first computers designed specifically for creative professionals and introducing a new series of Chromebooks, the low-cost devices usually made for the education sector, but this time aimed at businesses.

And the brand has a special guest in attendance. For professional gamer Julia Robson, it is a trip of a lifetime. “I could have been a dentist,” Robson muses, gazing at the New York skyline. Instead, she spends her days playing video games – and getting paid for it.

She gave up dentistry two years into her degree and today is affiliated with some of the biggest companies in gaming. She is at Next@Acer in her capacity as a gaming ambassador for Acer. “I’m probably the worst person to be a role model for a career,” she says. “But I was a serious competitive gamer for three years prior to starting my dentistry degree. During my studies, I competed locally and got scouted by a brand who offered me a full-time job.

“It was a viable career choice for me: I did enough research to take the decision to put my studies on hold.”

It has now been two years and Robson says she is privileged to be able to say e-sports is her job. “I am officially a professional video gamer. That means I compete at a high level in e-sports. During this period, I decided to build a gaming brand for myself, under my gaming nickname Bish.

“I use my gaming platform to share my gaming experiences, and also livestream to my Twitch community, where I share in real time with fans and interact with them.”

As part of being sponsored by Acer, she helps the brand interact with the gaming community and direct marketing strategy into the right areas. She is attending Next@Acer specifically to see what’s coming next in gaming. 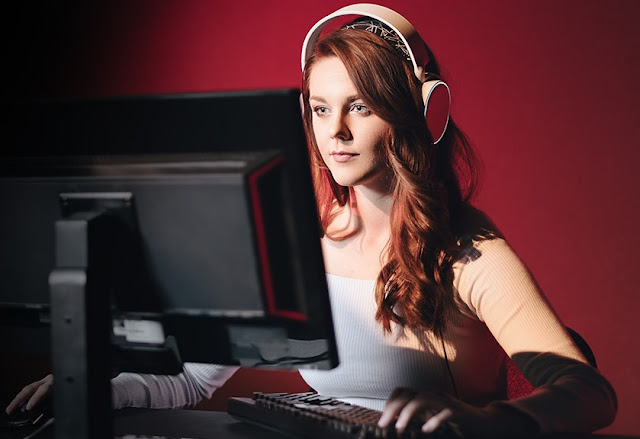 “Acer approached me with the idea of collaborating, not only in the sense of being a brand ambassador, but also to help increase their knowledge of the e-sports and local gaming community in South Africa,” she says. “I’m employed by them part time and I spend one day in the office and am on standby every other day.”

Robson’s main game is Apex Legends and at the time of the interview, she was forming a team to take on the Apex Legends League.

“I see a lot of potential in the sports and feel the game will go far, so I decided to create a team with highly skilled players that I scouted at events. The dream is to go global. If we have the opportunity to compete internationally, we will work twice as hard, sleep less and game more, just to make sure we can attend.”

She is cautious about recommending gaming as a career. “I would look at what options there are. I never want to say you can be a gamer and do whatever you want. “There are multiple opportunities in e-sports, and research will shine a light on how many available careers and courses there are that you can take to direct your passion into e-sports.

“I always recommend finding something you’re good at – still go to university or continue your studies, but look at how you can adapt your career choice into the e-sports industry,” she adds.

“If you check out esportsobserver.com, which lets you look up jobs in e-sports, you will see multiple jobs posted daily for people, for example, who have business degrees but also three years’ experience in e-sport.

“Do it for the love or passion for e-sports, but ultimately do it with the knowledge of what is required.”