Why the world is best explored on foot Running in cities, especially in Europe and the US, is not that easy, especially if you’re staying in a city centre hotel.

The sweat was already making its way into my eyes, even though it was only just after sunrise and the rocky walls provided cooling shade … and even though I had moderated my running pace out of respect for this forbidding place, Namibia’s Kuiseb River Canyon.

The sound of my footfalls echoed back at me from the ancient, jagged rocks as I wound up towards the plain. As I breasted the last incline, everything fell away into a tableau of open, empty, ochre-coloured space topped by a deep blue sky. The best time of day in any desert is the morning, before the heat distorts the view and the dust clouds blur the horizon.

I stopped. There was a ringing-buzzing sensation in my ears … which I realised was probably my brain trying to make sense of the silence surrounding it.

I recall another run – much shorter and only done to say “I’ve done it”: bundled up in a thick jacket, gloves and a woolen beanie, I had jogged less than half a kilometre across the ice outside the South African research base in the Antarctic. I didn’t take part in the base tradition – which was a totally naked “streak”, carried out at midnight on the longest day of the year in the sort of pitch blackness only Antarctica can deliver. I have always travelled with a pair of running shoes in my luggage. A good pair is perfect for city or country walking. Running in cities, especially in Europe and the US, is not that easy, especially if you’re staying in a city centre hotel.

In New York, I would get up before sunrise and head off about two kilometres to run through the leafy wooded Central Park. But getting there, even at that early hour, entailed a pinball-styled run through pedestrians on the sidewalks. And New Yorkers don’t particularly like it when you narrowly miss them.

In London, even though it has much more of a multicultural sound and feel to it these days, they are too polite to swear but even the foreigners have caught the English look of disdain and can execute it well. Braving the much narrower pavements there is worth it to be able to run through some really beautiful parks.

Running alongside a river, like the Liffey in Dublin, the Seine in Paris, the Elbe in Dresden was also an experience to be remembered. But, I’ve never tried to run in Amsterdam: the cyclists rule there and will run you down without a second thought.

Being next to an ocean is also special. Favourite runs for me included from Venice Beach to Santa Monica in Los Angeles; along the Copacabana in Rio De Janeiro and the Malecon ancient seawall in Havana, Cuba. 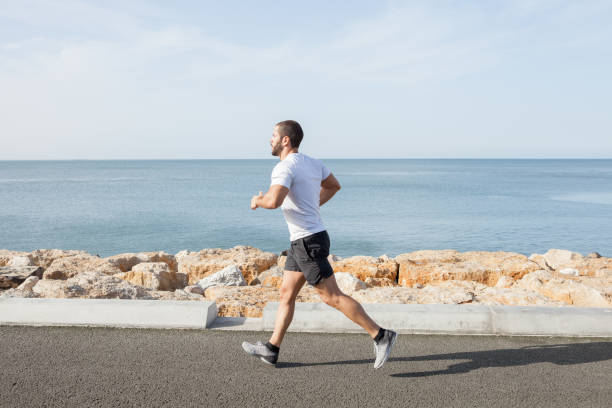 Our own beachfront runs – in Cape Town, in Durban and Port Elizabeth – are all beautiful in the morning or evening and the oxygen-filled salt air turbocharges your performance. Mountain runs – I’ve done a few in the Berg – are beautiful, but exhausting.

And therein lies the rub for the traveller. Much as it is exciting to experience a place from ground level, and running is one of the best ways to do that, in many cases, you will still have to use your feet for the rest of the day.

This is especially true if visiting major cities where public transport is good but to get the most out of the experience, you have to walk. And, unless you’re hyper-fit, you’ll end up flopping on to your hotel bed at the end of the day and passing out. Not the best way to enjoy a holiday.

So, unless you’re a fanatic runner, I find the best way to enjoy your travel destination is to run on alternate days – or just walk. Your slowed pace means not only that you’ll see more, but that you can stop in at a street café, order an espresso and watch the world go by, instead of dodging it on the sidewalks…

What does level 1 mean for your international travel plans? 1.3.2021
Splendour in ‘Green Kalahari’ – the magnificence that is the Augrabies Falls 28.2.2021
WATCH: The robots are taking over, is Joburg’s Hotel Sky the future of hospitality? 24.2.2021