Illustration of airplane taking off at sunset. Photo: Corbis

Price discrimination has been most successfully implemented across a wide range of services such as transportation, tourism, and even electricity.

Summer is underway, and it’s the perfect time to plan a getaway. After spending days deciding where you would like to go, you finally pick a destination. Flights are only a click away, right? But once you’re seated on the airplane, you might not be aware that a person right next to you may have paid a completely different fare for the same trip.

You might wonder, why would airlines discriminate between consumers in the first place and what are they trying to gain? The answer lies with the economic concept called “price discrimination”.

The practice is present across different industries and it is more common than you might think – in fact, most companies do it all the time. Every time you a “two-for-one special”, student discount, reduction coupon or voucher, you’re witnessing price discrimination in action. 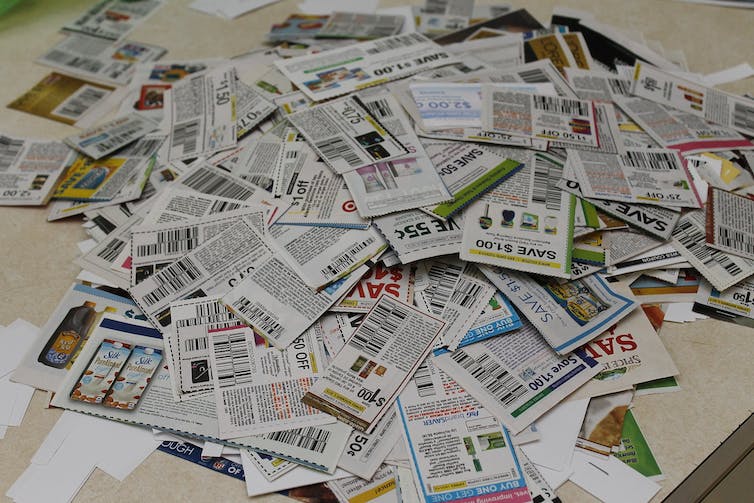 Price discrimination works in most industries, and coupons are one tool companies use. Picture: Wikimedia

Price discrimination has been most successfully implemented and developed across a wide range of services such as transportation (flights, trains, car services such as Uber), tourism and hospitality (restaurants, hotels, amusement parks), communication services such as mobile phones, and even electricity.

When it comes to airline pricing, a whole new playing field was created with the introduction of low-cost carriers in the 1970s, when Pacific Southwest Airlines was founded. An additional boost came in the mid-1990s with the introduction of the “peanut airlines” such as Easyjet and Ryanair in Europe and their peers in Australia, New Zealand and Asia in the early 2000s.

Now, what are the factors that are going to influence the airfare you pay?

First, everything depends on when you purchase your ticket. If you buy in March for a trip that will take place in August, you are going to pay significantly less than someone who buys a ticket at the last minute. Generally, people who plan their holidays well in advance are more concerned about paying a lower price than those who book it closer to the departure date.

As a consequence, airlines use the mechanism known as inter-temporal pricing, which allows them to target both “price sensitive” and “price insensitive” consumers. This represents a form of price discrimination, particularly evident among low-cost airlines. As Air Asia explains:

“Want cheap fares, book early. If you book your tickets late, chances are you are desperate to fly and therefore don’t mind paying a little more.”

You might have also experienced a frustrating situation when the price of an airfare (or a hotel booking) changes from one day to another, or even on an hourly basis.

This happens because airlines want to attract price-sensitive consumers and therefore have a certain number of economy tickets set aside to be sold at lower prices. If these seats start filling up quickly, the airline will boost the price for those that remain.

Travel in mid-September on a Sunday morning

The airfare will also depend on the months during which you will travel. Most people have limited options and would usually take off during school holidays. For these people, vacationing in mid-September would not really be an option. Knowing this, airlines differentiate between peak and off-peak demand periods and charge different rates of airfares.

This is known as the peak-load pricing, the practice of charging higher prices in high-demand periods. Another example where peak-load pricing is applied would be travelling in different periods of the day. Generally, there are flight times that are considered as “unpopular” and for those the demand is lower.

An example would be an early Sunday morning flight. Airfares for return flights on a Sunday evening will be more expensive than those for the same flight on a Sunday morning, simply because people want to make the most of their vacation or weekend, and thus choose to take a later flight.

It’s either seat options or a Saturday night stay-over

Airlines also use versioning, a form of price discrimination where different prices are applied based on the quality of the transport service provided. Several forms of the same ticket are available to customers. The high-quality version of an airfare is more expensive but provides traveller with options such as flexibility to modify flight dates and even cancellation of the ticket without paying a penalty.

On the opposite end, the low-quality version of the airfare is “restricted”. There are also versions that are considered as “damaged”, such as a fare with a Saturday night stay-over. Additionally, low-cost airlines like Easyjet or Ryanair charge for extras such as choosing your seat or checking in luggage. Other examples of versioning include travelling in business class – the airfare is higher than for economy class because passengers benefit from more space, better meals, as well as more personalized attention from the airline staff.

Finally, quantity discounts and frequent-flyer loyalty programs are also ways how airlines apply different pricing for airfares. In the case of Ryanair, the airline will provide a personalized quote on demand for those travelling in bigger groups, while Wizz Air has a discount club, with different options tailored to passengers’ specific needs, such as traveling as a couple or in groups of up to five members.

Like any other companies, airlines target consumers by using different pricing policies to increase sales – and there’s no reason why you shouldn’t do the same. So if you’re planning a trip this summer, be it on your own, with another person, or with a group of friends or family, keep these points in mind in order to secure the best possible deal when booking your airfare.

Price discrimination does not have to be a negative thing, as there are consumers who clearly benefit from it. Some even go further and use special websites such as SecretFlying or HolidayPirates to take advantage of mistakes made by companies using price discrimination. Airline companies play the game, and you can too.