The actor says he will miss seeing all his friends and colleagues in person this year. The soapie has also been renewed for a further two years, taking the show to its 35th season.

Having already won multiple Emmy Awards, the series has received 13 nominations this year in several categories including acting, writing, directing and costume design.

The 47th Annual Daytime Emmy Awards is set to be broadcast live on 26 June 2020. However, due to the pandemic, the ceremony will be virtual with all nominees joining from their homes.

We heard from Thorsten Kaye, who was nominated as Outstanding Lead Actor for his role as Ridge Forrester, about how he’s feeling ahead of this year’s “socially distanced” awards.

Have you and your fellow nominees had any conversations around what to expect from the 2020 Daytime Emmys?

I haven’t spoken with my fellow nominees, but I have thought about how strange it is and how different it’s going to be. I’ll miss seeing all my friends and colleagues in person this year. 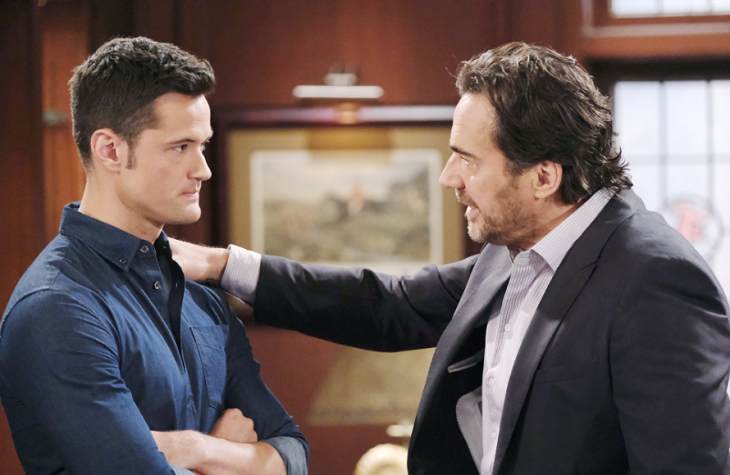 Matthew Atkinson and Thorsten Kaye in ‘The Bold and the Beautiful’. Picture: CBS

This is your first nomination for playing Ridge on Bold and the Beautiful, what was your favourite moment from his storyline in 2019?

There was a scene in which my on-screen son Thomas, played by Matthew Atkinson, has done something terrible that my character, Ridge, didn’t want to believe he did. I had to confront him and know the truth, even though it was painful. It’s one of those moments a parent hopes he never has to face.

You play a famous fashion designer, do you feel a certain pressure around awards ceremonies in terms of what to wear?

Wardrobe usually hands me a tuxedo and says: “Here, put this on.” After I ask if I have to and they say yes, then I grudgingly put it on.

When I arrive at the awards ceremony, the show’s publicist escorts me to the red carpet and says: “Please smile, they’re going to take your picture now.” I walk down the carpet and stop for photos, but I don’t smile. Do you have a favourite red carpet look?

Are you kidding me? I couldn’t name a fashion designer if my life depended on it. Can we talk about hockey now?

Bold and the Beautiful is the first US broadcast series to restart production after the Covid-19 lockdown. What are you most looking forward to now that you’re back filming in Los Angeles?

Having a beer in John McCook’s dressing room and listening to his jokes on set. He plays my father Eric, and he’s the most sensitive, charming man in the world with the best sense of humour. It’s a joy to know him.

Watch The Bold and the Beautiful on Monday to Friday at 5.30pm on Eva (DStv 141), with a Saturday omnibus at 4pm.