How coronavirus affects the brain There are also COVID-19 patients having ischaemic strokes, where a blood clot blocks the flow of blood and oxygen to the brain.

Six months into the COVID-19 pandemic, we’re still learning what the disease can do. There are now detailed reports of brain illness emerging in people with relatively mild lung illness, in those who are critically ill and also in those in recovery.

When it comes to the brain and nerves, the virus appears to have four main sets of effects:

To date, the patterns of these effects seem similar across the world. Some of these illnesses are fatal and, for those who survive, many will bear long-term consequences.

This raises an important question: will COVID-19 be associated with a large epidemic of brain illness, in the same manner that the 1918 influenza pandemic was linked (admittedly somewhat uncertainly) to the epidemic of encephalitis lethargica (sleeping sickness) that took hold until the 1930s? At this stage, it’s hard to say – but here’s what we know about the virus’s effects on the brain so far.

Firstly, some people with COVID-19 experience confused thoughts and disorientation. Thankfully, in many cases it’s short-lived. But we still don’t know the long-term effects of delirium caused by COVID-19 and whether long-term memory problems or even dementia in some people could arise. Delirium has been mostly studied in the elderly and, in this group, it’s associated with accelerated cognitive decline beyond what’s expected if patients already suffer dementia.

The virus also has the potential to infect the brain directly. However, most of the physical effects we’ve seen in survivors look like secondary impacts of the virus being present in the brain rather than the effects of direct infection. For example, our immune system can appropriately fight the virus, but may start to attack our own cells – including our brain cells and nerves. This may be through the actions of immune cells and antibodies via an inflammatory mechanism known as a cytokine storm, or through mechanisms we don’t yet understand.

There are also COVID-19 patients having ischaemic strokes, where a blood clot blocks the flow of blood and oxygen to the brain. Some of these patients have stroke risk factors (for example high blood pressure, diabetes or obesity), though their strokes have been particularly severe. It seems that this is because the blood rapidly becomes thickened in COVID-19 and, in these patients, there have been multiple blood clots in the arteries feeding blood to the brain, even in patients already receiving blood thinners. In others, there is brain bleeding due to weakened blood vessels, perhaps inflamed by the effects of the virus. Where infection with the coronavirus is associated with inflammation or damage to the nerve endings themselves, individuals may develop burning and numbness and also weakness and paralysis. Often it’s difficult to know if these are the effects of a critical illness on the nerves themselves or if there’s brain and spine involvement.

All of these effects on the brain and nervous system have the potential for long-term damage and can stack up in an individual. But we need to know more about what’s going on in people’s nervous systems before we can accurately predict any long-term effects.

One way of finding out more is to take a look inside patients’ heads using brain-imaging techniques, such as MRI. So far, brain imaging has revealed a pattern of previously unseen findings, but its still very early days for using it in this pandemic.

In one study, patterns found included signs of inflammation and a shower of small spots of bleeding, often in the deepest parts of the brain. Some of these findings are similar to those seen in divers or in altitude sickness. They might represent the profound lack of oxygen being delivered to the brain in some patients with COVID-19 – but we are only starting to understand the full scope of the brain’s involvement in the disease. Brain-imaging and postmortem studies for those killed by COVID-19 have been limited to date. 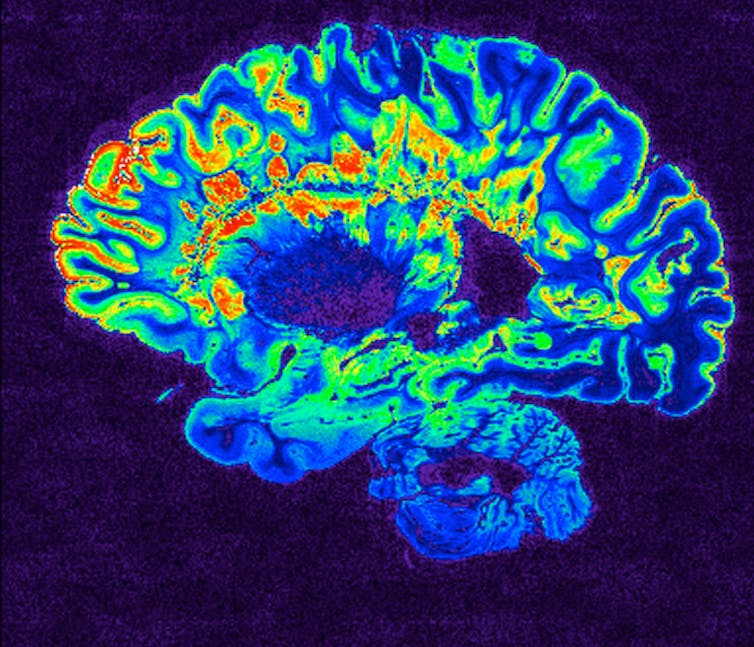 Only a select group of COVID-19 patients have made it into an MRI scanner so far. NIH Image Gallery/Flickr

Parallels with the past

The 1918 influenza pandemic may have killed 50-100 million people – one in 50 of those infected, and three to six times the number killed in the first world war. Yet it has faded from our collective memory. It’s not often mentioned that this pandemic was linked to an outbreak of brain disease – the “sleeping sickness” encephalitis lethargica.

Encephalitis and sleeping sickness had been linked to previous influenza outbreaks between the 1580s to 1890s. But the 20th-century epidemic of encephalitis lethargica started in 1915, before the influenza pandemic, and continued into the 1930s, so a direct link between the two has remained difficult to prove. In those who died, postmortems revealed a pattern of inflammation in the seat of the brain (known as the brainstem). Some patients who had damage to areas of the brain involved in movement were locked in their bodies, unable to move for decades (post-encephalitic Parkinsonism), and were only “awakened” by treatment with L-Dopa (a chemical that naturally occurs in the body) by Oliver Sacks in the 1960s. It is too early to tell if we will see a similar outbreak associated with the COVID-19 pandemic, though early reports of encephalitis in COVID-19 have shown features similar to those in encephalitis lethargica.

The aftermath of this global event has many lessons for us now in the time of COVID-19. One, of course, is that we may see widespread brain damage following this viral pandemic.

But importantly, it’s also a reminder to consider the political and societal impact of pandemics, and the need to help vulnerable people who have illness afterwards. COVID-19 has already exposed disparities in access to healthcare. Societies will remain judged on how they protect and treat those most at risk from – and sustain the health consequences of – this virus. This will include people with neurological disease arising from COVID-19.

The Conversation is funded by the National Research Foundation, eight universities, including the Cape Peninsula University of Technology, Rhodes University, Stellenbosch University and the Universities of Cape Town, Johannesburg, Kwa-Zulu Natal, Pretoria, and South Africa. It is hosted by the Universities of the Witwatersrand and Western Cape, the African Population and Health Research Centre and the Nigerian Academy of Science. The Bill & Melinda Gates Foundation is a Strategic Partner. more