The Shimansky journey started in 1991 when founder and CEO Yair Shimansky arrived in South Africa after spending two years in Japan.

He started designing and crafting jewellery which he sold at beachfront flea markets, before opening his first store in a popular shopping mall. This led to the launch of a full jewellery store two years later and a meaningful milestone in the jewellery journey.

Today, the label is world-famous for its trademark elegant and innovative designs which highlight the natural beauty of diamonds and tanzanite.

Shimansky has taken a polished kernel of an idea and transformed the meaning of quality, diamond design into a globally recognised jewellery brand. The brand has grown in the space of just three decades, but the story of each diamond creation begins 3.3 billion years back, when the Earth’s fire was captured and carbon compressed into the diamonds, which make their way into the brand’s iconic jewellery creations.

Shimansky started travelling on his sea captain father’s maritime tanker aged just three months, inspiring a lifelong love of travel in the curious young man. It was a visit to Japan at the age of 22 that set him on course towards the pinnacle of the sparkling diamond world.

The experience he gained there inspired his pursuit of perfection and put him on a path he still travels today: learning everything about the jewellery and diamond industry.

Two years after this dazzling epiphany, in 1991, he travelled to South Africa to visit his parents and subsequently met the woman who would later become his wife, giving the restless traveller an opportunity to put down roots.

The application of his hard-won knowledge of the finest diamonds and the most stringent of jewellery production methods, set his humble beachfront flea market stall apart. Shimansky Diamond Jewellers had became one of the most luxurious diamond boutiques in Cape Town by 1994. 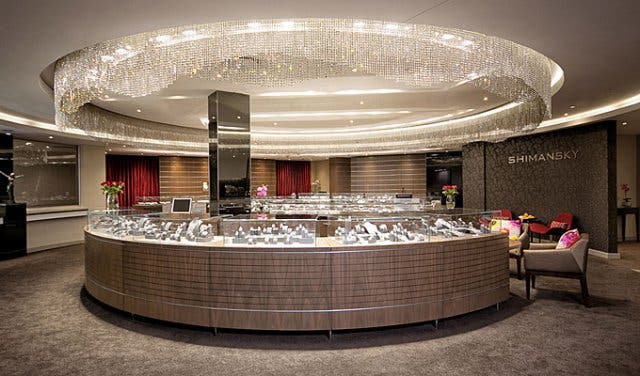 One store has grown into seven across Johannesburg and Cape Town, a wholesale location in Hong Kong and a new location in New York – and possibly the world’s most prestigious shopping street, 5th Avenue.

Retaining a hand in every step of the process, from the selection of rough diamonds which Shimansky still does himself literally by hand, from a small pool of artisan South African diamond mines to the design and production of the brand’s signature pieces.

After selection, the diamonds follow a carefully monitored path into the workshops of expert artisans, where they are marked, cut and polished to the most exacting of standards, with a focus on brilliance, rather than size.

From mine to finger: each stone is ethically sourced. Picture: Supplied

International Gemological Institute of America gradings certify their quality and, crucially, no middlemen are involved in the progression of the diamond from “mine to finger”. This means the quality, authenticity and history of each diamond is carefully preserved and significant cost savings are passed onto loyal customers.

The jeweller’s devotion to bringing out the dazzling fire at the heart of every diamond has led to the development of many patents, near-impossible-to-copy innovations and technologies unique to the brand. Millennium is the most sought-after engagement ring in South Africa and is copyrighted around the world. Brilliant 10, which takes three times longer to polish than any other cut and is achievable by only one in 1 000 diamond cutters, is the most brilliant diamond cut in the world.

The Shimansky workshop is in the heart of Cape Town, in the Clock Tower precinct at the V&A Waterfront. The Shimansky Rockwell Diamond Experience in Green Point – showcased via guided tours – gives visitors insight into the expert craftsmanship needed to create each piece, with both complemented by glittering showrooms for the brand’s finest creations.

There are other Shimansky stores at Canal Walk in Century City, the International Departures mall at Cape Town International Airport and Sandton City in Johannesburg.