Bigger maize harvest could help contain food price inflation at around 4% locally – while the door to exporting to Zimbabwe has opened.

This is despite the 2019/20 production season starting on a negative footing with delayed rainfall across the country. Summer crops include white maize, yellow maize, sunflowers and soybeans.

Wandile Sihlobo, chief economist at the Agriculture Business Chamber (Agbiz), says the recent increase in rainfall after the planting season has resulted in a positive outlook for volume production in the country.

The main maize-producing provinces are Mpumalanga, North West and the Free State.

Should the widespread rainfall continue in the coming two months, says Sihlobo, a bigger maize crop than the 2018/19 commercial harvest of 11.3 million tons would mean that South Africa’s food price inflation could be contained at comfortable levels this year.

“The one that should be watched closely that is important for food pricing is maize meal,” he adds. “The estimates in the market so far range between 12.5 million tons and about 14 million tons that could be produced.”

SA’s food price inflation averaged 3.1% year on year in 2019 –“a year which saw elevated inflation of grain products prices and subdued meat prices”, according to Sihlobo.

“All things being equal for 2020, SA food price inflation could average 4% year on year if there is a good maize harvest. This is slightly higher than last year’s food inflation, which was 3.1%.”

He says this is based on assumptions that meat prices could lift marginally from where they were in 2019.

“We are assuming subdued red meat prices on the back of restricted exports following another outbreak of foot-and-mouth disease in the country.”

South Africa is a net exporter of maize. As indicated in the graph below, domestic maize production has, for the most part, far outpaced consumption, making the country a net exporter. 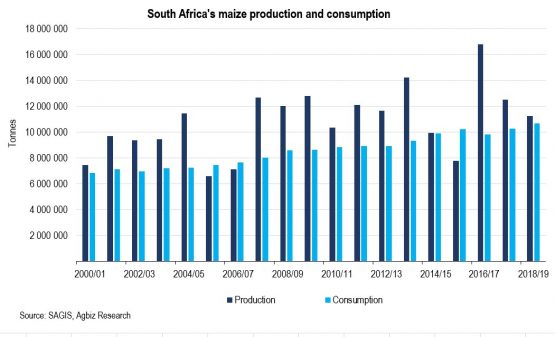 Over the past five years, SA has exported an average of 1.7 million tons of maize annually. Expectations are that this will increase to three million tons in the year to the end of April 2020.

“So far, we have exported north of 70% of that number,” Sihlobo says.

Early this month Zimbabwe lift a ban on the importation or growing of genetically modified (GM) maize.

Since SA produces about 80% of its maize from GM seeds, its ability to supply the Zimbabwean market has, until now, been limited.

Sihlobo believes the country’s maize exporters will largely benefit from the decision by the government of Zimbabwe.

“There were always problems accessing the Zimbabwean market, but we do believe that Zimbabwe will be an important market for us, now that they have lifted the GM crop ban on maize imports,” says Sihlobo.

Until now Zimbabwe has imported most of its maize from the US, Brazil, Mexico and Russia.

South African farmers in the spotlight 27.3.2020
‘For the Love of the Land’ tells tales of how farmers transform barrenness to bounty 30.1.2020
International analysts expect an improved SA maize crop 27.1.2020